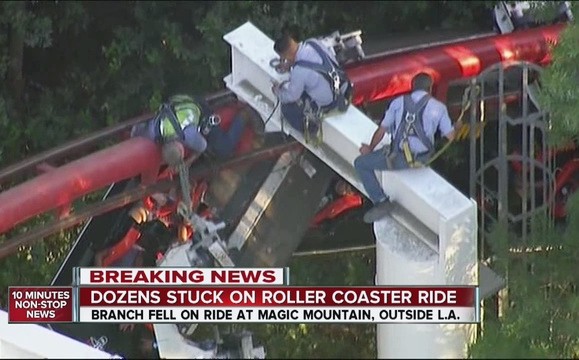 When a ride malfunctions at an amusement park, carnival, theme park, state fair, or street fair it can cause serious or permanent injuries to park visitors

Mechanical failures are the most common reason for ride injuries and can occur because of poorly maintained or aging rides and equipment. Ride mechanisms are in continuous use on average of up to 14 hours each day.

Mechanical failure can include rides that suddenly stop, eject riders, collide with each other, or fail to stop causing injuries that can be fatal or permanently life-altering.

Every year, 335 million people visit amusement parks in the U.S.

Negligent amusement park and carnival operators are responsible for thousands of accidents every year.

Depending on the circumstances of an amusement park accident, legal responsibility for injuries to park visitors are amusement park owners, ride designers, ride manufacturers, ride operators or concession stand owners.

When someone is injured at an amusement park, the park may be liable for those injuries and damages. Amusement park injury victims can file a personal injury lawsuit against those negligently responsible to get financial damages for their injuries.

The most common injuries that happen at amusement parks can include.

Contracted Theme Park and Amusement Park workers are susceptible to injury and even death while working on park grounds and may not have the same workers’ compensation coverage as regular park employees.

Contracted or Outsourced workers that are injured while working on Amusement park fairgrounds may be eligible to file a lawsuit if they are injured on the job as a result of negligence on the part of the amusement park owners or operators.

Amusement Park operators and park owners have a responsibility to ensure that park employees and other workers have a safe working environment.

Amusement Theme Parks Owe You a Duty of Care

Most states without specific regulations for amusement parks, carnivals and theme parks have that are called duty of care rules for businesses open to the public. Amusement park owners and operators must do everything reasonably possible to protect their visitors from undue harm.

When amusement park operators fail to protect their visitors from injury, they have violated their legal obligation (or duty of care).

What to do When Injured at an Amusement Park

If you have been injured in an amusement park accident, whether on the grounds or while on a ride, you have a right to compensation. For a claim to be successful, you will need to gather evidence to prove the amusement park’s negligence caused your injuries.

What Needs to Be Proven For an Amusement Park Claim

Possible defendants in an amusement park accident lawsuit may include:

Time is of the essence when it comes to filing your Amusement Park Accident lawsuit!

If you or a loved one has been injured in a Theme Park or Amusement Park Accident where you feel you may be entitled to compensation, please complete the contact form on the right or call us at 1-888-267.1137 for a free case evaluation. A live personal injury counselor is available to answer your questions 24 hours a day.

All of our experienced personal injury lawyers work on a contingency basis and don not get paid unless you do!

Each State has a strict statute of limitations for you to file your Amusement Park Accident lawsuit.  Fill out our FREE CASE EVALUATION form or call toll free us now.

Choosing an experienced personal injury accident lawyer will be very important to your lawsuit and the amount of compensation of your settlement!

What Are Asbestos Trust Funds?

If you have been diagnosed with mesothelioma or asbestos lung cancer, you may be entitled to financial compensation from Asbestos Trust Funds.

Asbestos companies that have filed for bankruptcy protection have established asbestos trust funds to pay claims. There are about 65 active Asbestos Trust Funds totaling more than 30 billion.

Since the mid-1980s more than 100 Asbestos Bankruptcy Trust Funds have been established in the U.S. At least a dozen trust funds have equities exceeding $1 billion.

More than 30 billion dollars is currently available for distribution to qualified applicants. Asbestos Bankruptcy Trust Funds have set criteria of values they pay to qualified claimants.

Asbestos Trust Funds have paid out $18 billion for more than 3 million claims!

When Amusement Park companies are negligent with improper equipment maintenance, structural maintenance, design flaws, and defective rides they can be held liable for injuries caused to innocent people that suffer serious injuries or death.

If you or a family member has been injured in an environmental accident, we can help you start an injury lawsuit against responsible parties to help with medical bills and financial compensation.

Our experienced nationwide Amusement Park Accident Injury lawyers will help you get just and fair compensation for your injuries.

We can usually tell within a few minutes whether we can help you, and if we cannot, maybe direct you to someone who can.

We are always available 24 hours a day to answer your questions with a phone call or email and we will do everything we can to ensure that you receive the highest compensation for your injuries.

If you have a legal question about an injury or wrongful death lawsuit, you do not have to come into our office. Call us, and you will speak directly to a lawyer, and if a lawyer is not available, your call will be returned as quickly as possible.